I’m just popping in during a moment of calm to let you know I’m still alive. We moved in to our new house last Saturday and have been busy at work since. In fact, we were actually busy at work painting and prepping for the week before we moved in, so this week has really been devoted to getting settled and falling in to a new routine. It’s amazing what you don’t realize you need until you live in a house. For example, I currently feel like I am typing from the surface of the sun. I actually have sunglasses on. The glare is so bad in my little office nook! I need to add a solar shade or something to our list!

As with every move, however, something had to go wrong. The day we moved in, Comcast came out to hook up our Internet and told us that there was no Internet line. It would be a few WEEKS before we had Internet. Um, WHAT? I like being cut off to unwind, but not having any Internet (especially when you’re paying for it) for a few weeks really does a number on a blogger! Thankfully our sweet new neighbor gave us her wifi password, but we’re trying to not use it that much since it slows her down. Hence why this is my first post in 100 years.

So what have we been up to?

Well our first priority for the new place was the living room. I wanted to paint, install a ceiling fan, hang some curtain rods, and get our new couch put together before we moved in. We juuust barely made that goal. Here’s how the living room looked the first day we were in there: 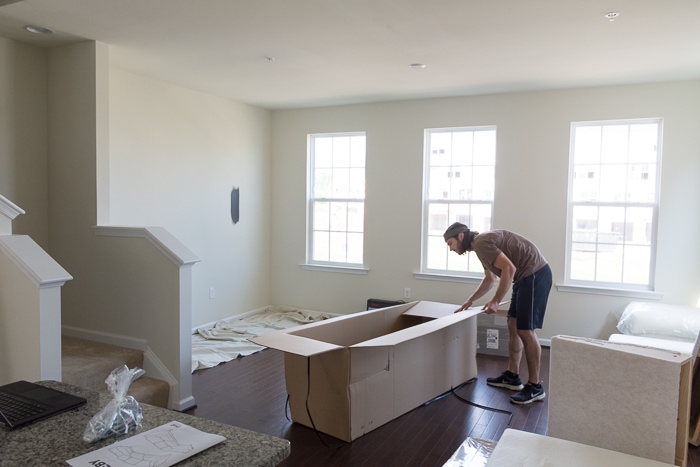 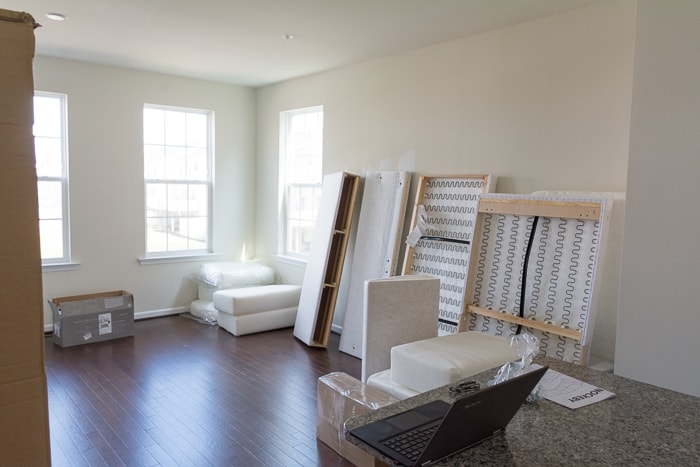 The first thing I did was tackle the big black wall. I have literally been dreaming about my black walls for months now. We used Sherwin-Williams Tricorn Black in Eggshell for two walls in the living room, and they are the main two walls. Mom helped this dream come true…here are a few wet paint shots: 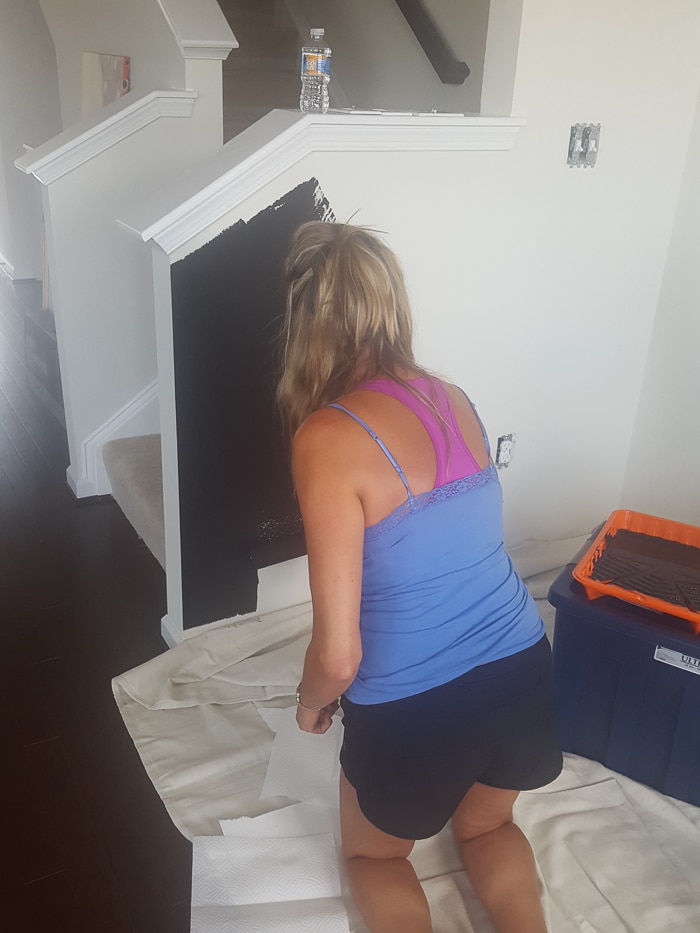 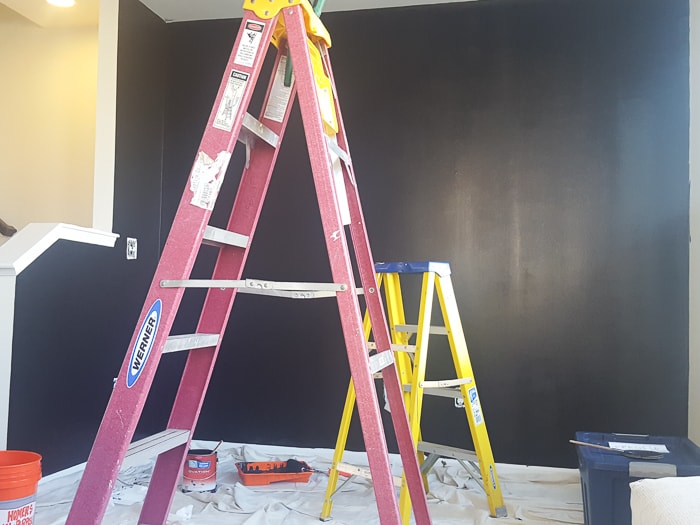 The black was tough to paint. We ended up doing three coats, and these shots are of the second coat drying. Pro tip: black is a terrible color to practice cutting in with. Don’t ask how I know.

Then I moved on to the remaining walls in the living room, and man did I agonize over that color. After researching the different light grays I was considering, I opted to get samples of four: Blizzard Fog (Valspar), Icy Avalanche (Sherwin-Williams), Repose Gray (Sherwin-Williams), and Tempered Gray (Valspar). 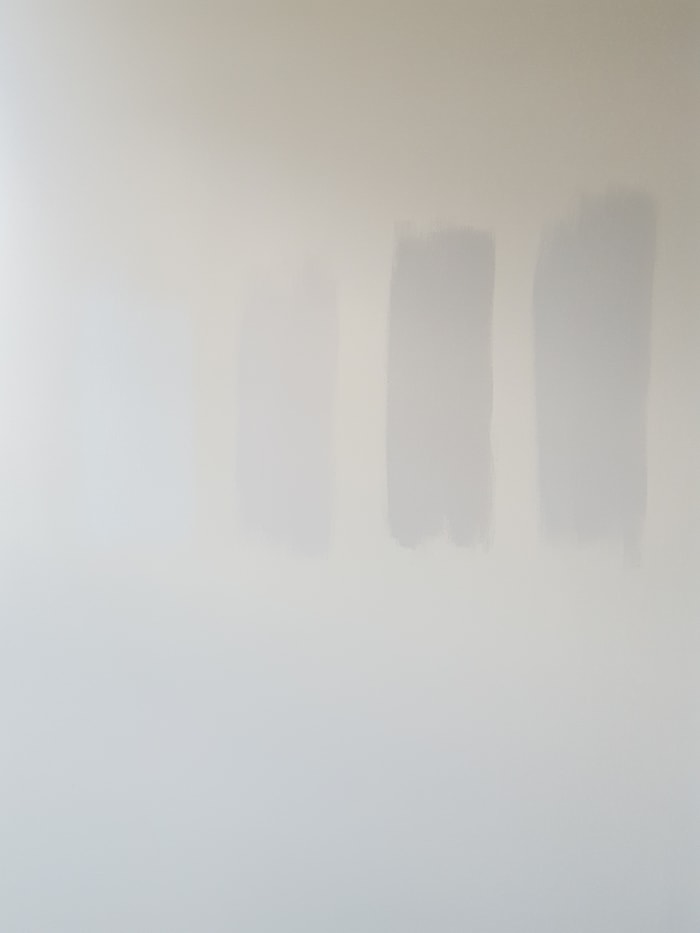 Here is Mike agonizing over what was surely his greatest decision to date (he said they all looked the same, boo): 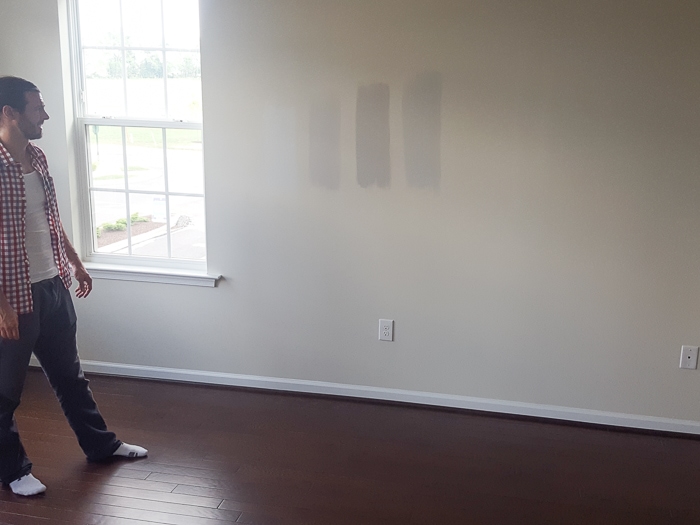 After I stared at them for 2 days straight, I decided to paint my top two choices, Blizzard Fog and Icy Avalanche, right next to the Tricorn Black wall (this is before the third and final coat on the black wall): 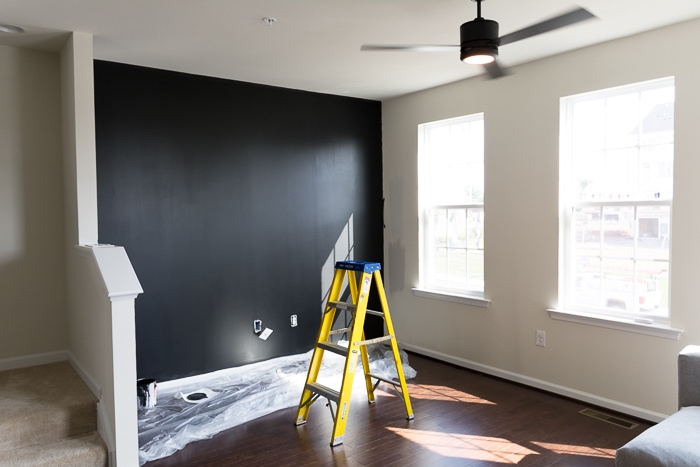 I wanted the remaining walls to be a super light gray, but I didn’t want a blue tint at all, and I didn’t want it to come out too dark. I really wanted the black wall to pop, but I wasn’t sold on either color, so I ended up going with the second one, Icy Avalanche from Sherwin-Williams, tinted at 50% lighter.

Here’s what Icy Avalanche tinted at 50% lighter looks like: 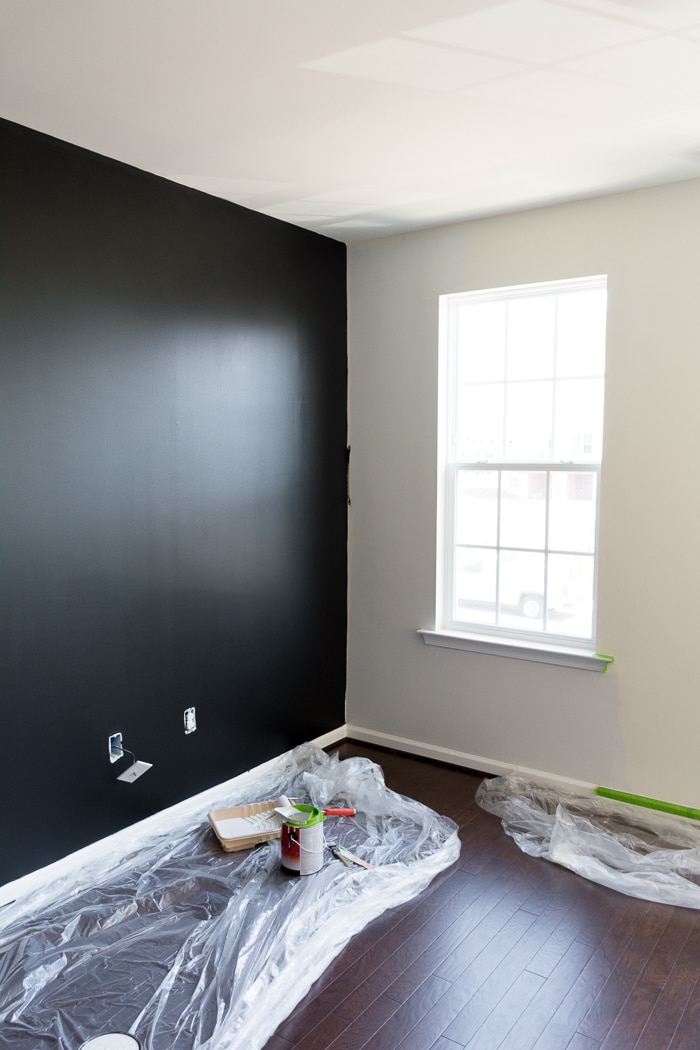 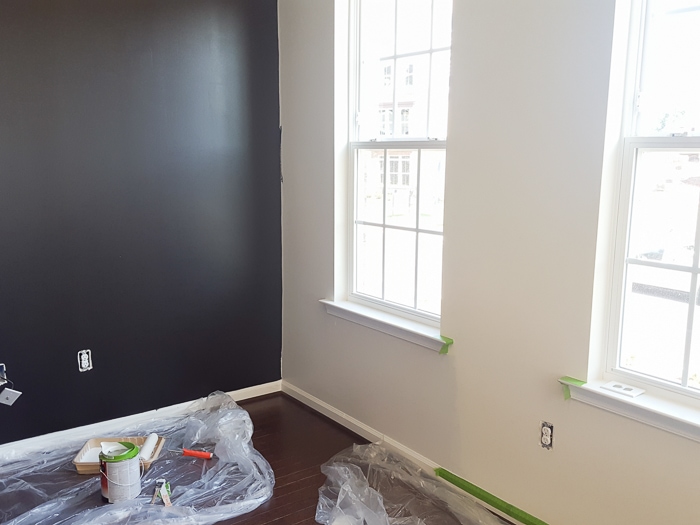 Just perfect! I was sold, so I finished off the remaining two walls (don’t judge us, we hadn’t cut in that messy corner yet): 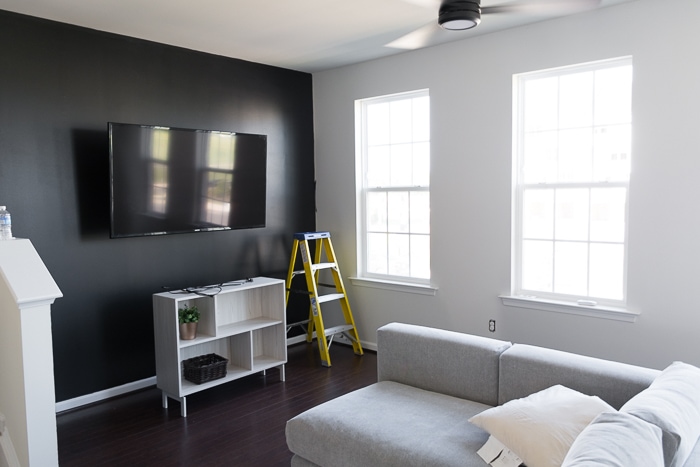 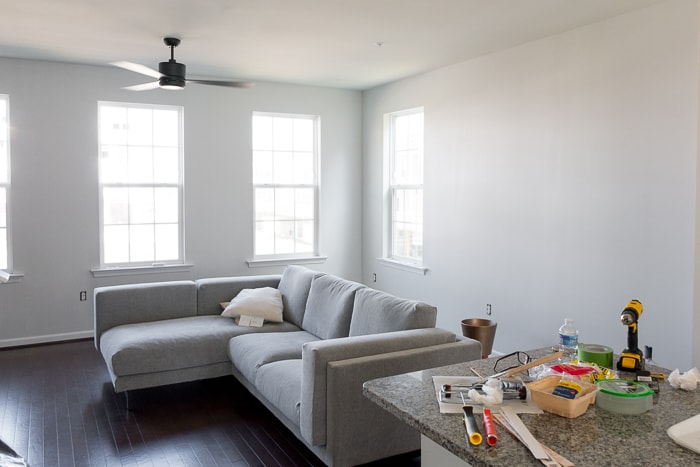 It’s amazing what a difference the Icy Avalanche made in the room–it was liberating to paint over that bland ivory.

You’ll also notice in the pictures above that we mounted a new TV, put up a new fan, and put together a new couch. These were three purchases we planned to make for the new house. We have embarrassingly been watching the smallest, worst TV on the planet but decided to hold off on buying something nice until we finally bought a house. I had also dreamed of having a small sectional couch, but it just wouldn’t fit in any of the apartments we’ve lived in.

Here’s the before of the couch:

And my mom modeling the after! We got the Ikea Nockeby 3-seat sectional in black and white with wood legs. 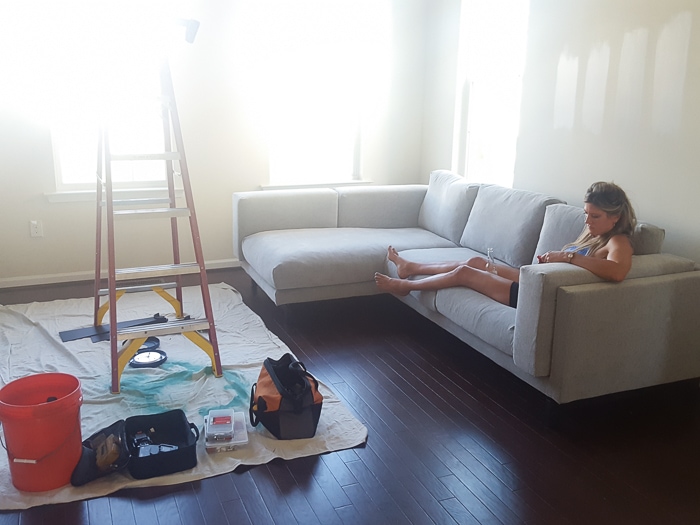 I also cannot recommend our new fan enough! You can buy it here (affiliate link)! It’s so sleek looking, super quiet, and produces great air flow. It’s remote controlled and has a dimmer, too.

So that’s our progress for now. We just put curtains up (thanks mom for ironing them for 6 hours, you’re the real MVP), but I still have to hem them, and I’m still figuring out how to set up the rest of the room as we settle in. Regardless, we’re loving the new place already, and I’ll be back with more projects and updates soon!

And it's why I had to turn off comments on my posts that are older than a few weeks. However, I want to know if you have a question! You can hop over to my Instagram or Facebook pages and leave a comment or send me a direct message. Thank you for visiting and reading!

This blog's content is for entertainment purposes only and is not professional advice. By reading this blog and attempting to re-create any content shared on it, you assume all responsibility. Read my full Terms of Use  here. Be safe out there!

Hi! I'm Brittany. This is my modern DIY, crafting, townhome living, tiny gardening blog. I'm a maker who loves simple decor, plants, cats, and naps. I hope I can inspire you with ways to infuse creativity into everyday life.

I want you to know...
I participate in affiliate programs, run targeted ads, and use cookies. As an Amazon Associate I earn from qualifying purchases. If you continue on this blog, I'll assume that you are happy with these policies. You can read my full privacy policy and disclosure here. You can also read my full terms of use here. Thanks for visiting!