I’m making good on my resolution to sew more in 2015. I just completed my second sewing project, which was making two envelope throw pillow covers for our couch pillows. Our couch and throw pillows are the exact same fabric and color, so I thought our living room could use some diversity. However, throw pillows are expensive! So I decided that this would be an easy project for my beginner-level skills.

This post contains affiliate links. You can read more about that here. Thank you!

Step #1: Measure and cut your fabric. First, I cut strips of fabric for my stripes. I knew the measurements for the front of my pillow cover were 22in x 22in, and I also knew I wanted 4 stripes (2 chevron, 2 beige linen). Therefore, I divided 22 by 4 to get 5.5in—the height of each stripe. I made a 22in x 5.5in pattern using taped-together computer paper and used it to cut out 4 strips of chevron and 4 strips of beige linen.

Step #2: Sew your stripes together to make the pillow cover’s front. To do this, first pair each chevron strip with a beige linen strip. Ensure the right sides of the fabric are facing one another, pin them together along one side as illustrated below, and sew a straight seam up the pinned side. Then, trim the excess fabric from the seam.


Step #3: Repeat step #2 until you’ve sewn together 4 pairs of strips. Then, press the seam of each strip so that they lay flat like the right image below.

Step #4: You now have four sewn-together pairs of stripes. Pin and sew together two more pairs of stripes to complete the pillow cover fronts. Press your new seams flat.

Step #5: Now it’s time to work on the back. Pull out the two big beige linen pieces you cut in step #1. Cut the fabric into two pieces–one 22in x 11in piece and one 22in x 17in piece. Hem one 22in side on each piece. These hems will be the opening of the envelope enclosure.

Step #6: Sew the long beige linen piece onto the top of your pillow cover’s front. To do this, pin the two pieces together with the right sides facing one another; then, sew a straight seam. Ensure you’re sewing along the raw edge, not the edge you just hemmed. It will look something like this when you’re done:

To help you visualize how the back will look (with only half of the back done):

Step #7: Now, sew the remaining beige linen piece to the bottom of your pillow cover front (again, ensure you’re sewing along the raw edge, not the hemmed edge). Now that the entire back is sewn on, the pillow cover will look like this from the front:

Step #8: Now, all you need to do is sew up your sides. To do this, fold the pillow cover’s two back sides up onto the front. The right sides should all be facing each other (i.e., your pillow cover should be inside out–see below image, top left). Because of the measurements you cut in step #5, your beige linen fabric will overlap to form the envelope enclosure.

See, wasn’t that easy? I’m very pleased with how they turned out for my first venture. Now I want to make new pillow covers for our bedroom pillows, too. 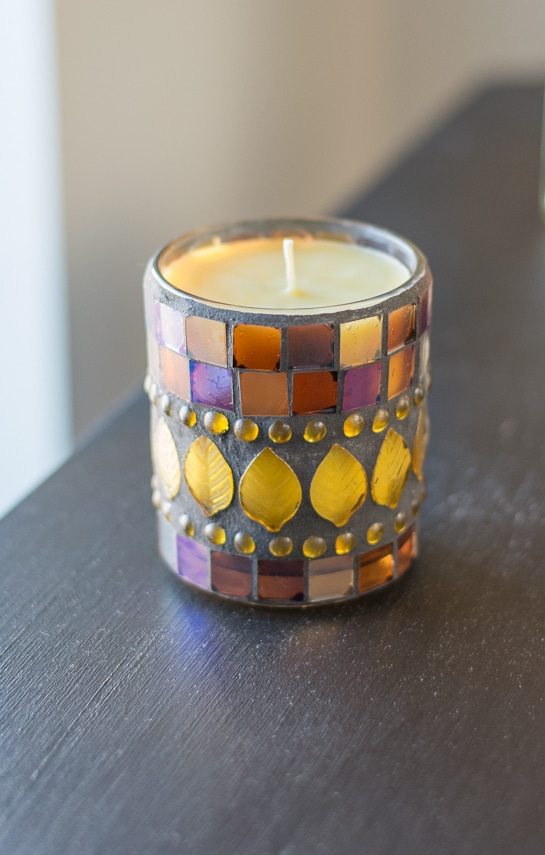 Next
Beeswax and Coconut Oil Candles Recipe
Comments are closed.
Comment spam is the worst. And it's why I had to turn off comments on my posts that are older than a few weeks. If you see a spot to leave a comment, please do. If you don't, I still want to know if you have a question! You can hop over to my Instagram and leave a comment or send me a direct message. Thank you for visiting and reading!
+++
This blog's content is for entertainment purposes only and is not professional advice. By reading this blog and attempting to re-create any content shared on it, you assume all responsibility. Read my full Terms of Use here. Be safe out there!

Hi! I'm Brittany. This is my modern DIY, crafting, tiny gardening blog. I'm a maker who loves houseplants, cats, Ikea, and naps. I hope I can inspire you with ways to infuse creativity into everyday life.
86shares