This post is sponsored by alcohol. And maybe a little Xanax.

Hey guys, and welcome back to my second update for the spring One Room Challenge! If you’re just now joining me, take a peek at last week’s post:

WEEK 1 // BEFORE PICS AND PLANS

We’re working on our master bathroom, and today’s post is all about demo. Let me let you in on a little secret if you’ve never gutted a room to put it back together: demo really, really sucks. There is just no two ways about it. It is not a stress reliever like they tell you it is on renovation TV shows. There is no cool music playing in the background (well, there can be, but it doesn’t make it less painful). And I pretty much hate it and am so thankful for my sweet dad and husband for all of their hard work helping out.

As a reminder, here’s the before pic: 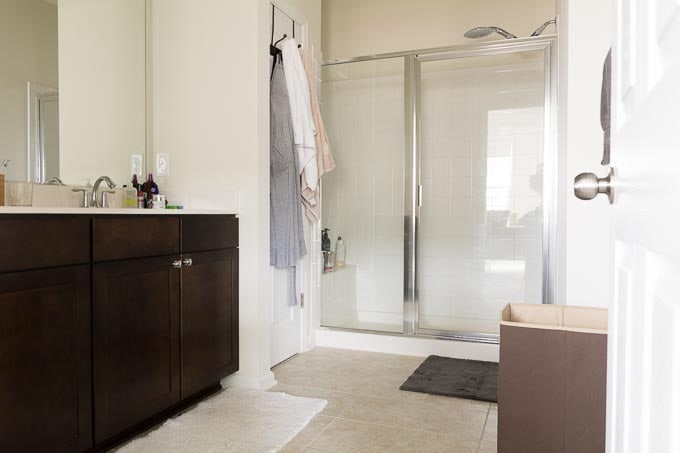 (Disclaimer: Please don’t hurt yourself doing demo work, guys. It’s messy and can be dangerous. Remember to wear a mask and eye protection. Do not use any tools without proper training, precautions, and supervision.)

Ripping it all apart

And as another reminder, we’re taking out the wall and floor tile, the shower area, and the little closet Mike is facing in this pic:

Before we got started, we laid drop clothes from the bathroom alllllll the way to the garage to protect the floor. Tip…set up in a sunny spot because cats love getting in the way and sunny spots:

Here are a few of the pics from the demo process. Please just imagine the kind of b-roll guitar track you’d hear if this were a TV show. Don’t imagine all my cussing.

Wahoo! Nothing was in the back of the shower; it was just unused space that they sealed off to make the world’s most useless shower seat. Yes!

Closet completely out…and we found a vent pipe in the way. That’s the white pipe behind the drill. We’ll talk more about that in a bit. (Demo tip if you have cats…cover up holes in the floor. They WILL get in the floor and play in the ceiling.)

And guess what we found when we finished pulling up all of the tile floor? That our toilet had been leaking and had already seeped through the subfloor. There was no wax ring put on when it was installed. Cue me entering a fit of rage right about now thinking about what would have happened (i.e., the ceiling below sagging and getting a giant water spot on it) had we not caught this. My fit of rage lasted a few hours and slowly morphed into, “BUT ARE THE OTHER TOILETS SAFE???” But we can’t think about the other toilets right now.

There are lots of things you don’t think about with demo, either. Like all of the screws and nails you’ll have to remove before you can start putting anything back together. Sounds easy, but it’s just one of many, many small things you need to do before moving on to the next step!

Alright, after ripping everything apart, we had some prep work to do before putting it back together. That included having Jon the Plumber in to do a little work for us. (I did NOT feel comfortable doing DIY plumbing…we wanted to know that everything was done right.)

Ahh, the tub. Guys, the tub ordeal was one for the record books. Heartfelt thanks to everyone who had to deal with me that day as I was flipping out about having to return a tub (Mike, dad, Jon, and definitely Patrick and Brian for their excellent counseling and quick thinking). Yes, I said return a tub. Here’s the original tub sitting in our garage.

Yes, it’s beautiful, but it’s too big. Yes, I did measure it before I bought it. No, I was not properly visualizing how it would look in the space. Rookie mistake, but I’m not a designer, so it happens. Although the tub was BEAUTIFUL and of superb quality, we returned it the next day (SO GLAD I ordered it from one of the big-box stores and could return it so easily!) and bought something else. Something smaller, both in length and width. Here’s a peek at the new one:

I got it online and HATED having to buy something this big online without seeing it, but I am super pleased with it. However, switching it up from a drop-in to a freestanding tub threw some of our plans out the window. I guess that’s just the way things go with major renos–you gotta be flexible accept the fact that some things just might not work out/might have to change.

Putting it back together

Any who, while we were thinking through some of the changes we’d need to make, artsy Jon the Plumber sketched out this expert rendition of the space:

The area between the vanity and the tub…that vent pipe posed a bit of a problem, so we ended up deciding to move the vent pipe back up against the wall, build a knee wall by the vanity, and just build out an area to accommodate the vent pipe. I wasn’t super happy about it at first, but when Jon drew this out, I could visualize it a bit more. We also decided to build out a knee wall behind the tub to accommodate a wall-mounted tub filler.

Measuring for the knee wall height:

Knee wall being built out behind the tub area, new subfloor laid! Man, laying that new subfloor made SUCH a difference!

Knee wall separating the vanity and the tub area built in, as well as the little enclosure for the vent pipe. I know what you’re thinking: Brittany, that looks kind of terrible right now. Yeah, that’s was I thought when we first decided to do it. But I have plans for it…promise!

“Why can’t I get in the floor and play in the ceiling anymore?” -Blanche

And with the last of the walls back up, we’re all ready to take a nap.

So what’s next? Everything has been ripped apart and, for the most part, put back together. Next week I’ll be sharing progress on laying and grouting the floor tile, laying and grouting the wall tile, and a few other miscellaneous things. I really want to get the baseboards and shoe moulding back up…and patch and tape the sheetrock corners. We’ll see what I have to share with you! 🙂 Until next week…

I agree, demo can be a major pain. But you got so much work completed!

This is quite the project!! It's looking good though! Can't wait to see the added details when you are finished!

oh my goodness! The toilet ordeal would have set me on a war path as well.Your progress is fabulous though!

Wow! This is a major makeover Brittany! It's going to be amazing....can't wait to see more!


Comment spam is the worst. And it's why I had to turn off comments on my posts that are older than a few weeks. If you see a spot to leave a comment, please do. If you don't, it probably means the post is older than 2 weeks. However, I want to know if you have a question! You can hop over to my Instagram and leave a comment or send me a direct message. Thank you for visiting and reading!

Hi! I'm Brittany. This is my modern DIY, crafting, tiny gardening blog. I'm a maker who loves houseplants, cats, Ikea, and naps. I hope I can inspire you with ways to infuse creativity into everyday life.
0shares